Vancouver, March 23, 2017  - Canasil Resources Inc. (TSX-V: CLZ, DB Frankfurt: 3CC, “Canasil”) announces that the Company has received assay results for three additional drill holes, ES-17-13, ES-17-14 and ES-17-15, of the 2016-17 core drilling program at the La Esperanza silver-lead-zinc project in Durango and Zacatecas States, Mexico. All three drill holes intersected mineralized vein structures with results detailed in the table below. ES-17-13 was a 90-metre step-out to the northwest from prior vein intercepts, and ES-17-14 and ES-17-15 were each 50-metre and 100-metre step-outs below the previously identified southeastern zone of the La Esperanza vein. These drill holes have extended the confirmed intercepts of the La Esperanza vein to approximately 335 metres along strike and to a depth of 425 metres below surface. All three holes appear to have crossed or passed close to faults located to the northwest and southeast of the central zone of the La Esperanza vein. This resulted in ES-17-13 being lost in a cavity, presumed to be part of the vein structure, and low recoveries and loss of vein material around the vein intercepts in ES-17-14 and ES-17-15. These factors may have contributed to lower intercept widths and grades reported from these holes. All the holes intersected the vein in relatively wide, altered structures in areas where prior drilling did not reach the vein, and extend the known vein zone indicating a strong mineralized system which is open for further investigation along strike and to depth.

In addition drill holes ES-17-16, a further 50-metre step-out to the southeast from ES-17-15, and ES-17-17 targeted 75 metres below the main ore shoot in the central area of the La Esperanza vein have been completed, both intersecting the vein structure. ES-17-17 intersected a 10-metre vein structure where banded quartz carrying sphalerite and galena is observed – assay results for these holes will be reported when received. A total of 1,820 metres in 6 drill holes has now been completed for the current drill program. A further drill hole, ES-17-18, is in progress in the northwest of the vein system, increasing the current program to approximately 2,200 metres in 7 drill holes.

The drill program is being implemented by the Company’s exploration team under the direction of Eng. Erme Enriquez (CPG), Director of Exploration and Development of Minera Canasil S.A. de C.V., the Company’s wholly owned Mexican subsidiary. All core samples are processed at the Company’s core processing and storage facility in Durango, Mexico. Samples are cut by diamond saw, and half is sent for assay and half secured for reference. Samples are sent to the ALS Laboratories in Zacatecas, Mexico for preparation and then on to ALS Laboratories in Vancouver for assay analysis for gold and silver by fire assay with an atomic absorption finish (“FA-AA”) on a 30 gram split, and for silver, copper, lead and zinc by digestion of 0.50 gram sample in aqua regia and analysis by AA.

The La Esperanza silver-lead-zinc project covers 14,916 hectares, located 100 km SSE of the city of Durango on the border between Durango and Zacatecas States. The project site is easily accessible from Canasil’s operating base in Durango with excellent infrastructure. The project location in southern Durango and northern Zacatecas States is on the well-recognized world class Fresnillo silver belt, hosting a number of prominent silver mines such as San Martin-Sabinas mines of Grupo Mexico and Penoles, the La Colorada mine of Pan American Silver and La Parrilla and Del Toro mines of First Majestic Silver and Fresnillo PLC’s Fresnillo mine.

A series of silver-lead-zinc epithermal veins are observed over a northwest-southeast striking zone extending over approximately 20 kilometres hosted in the Lower Volcanic Group. Mineralization occurs in low to intermediate sulphidation veins, primarily striking northwest and dipping southwest. The main La Esperanza vein is a banded and cockade white to grey quartz breccia epithermal vein with silver, lead and zinc mineralization associated with argentiferous galena, silver sulfosalt minerals and sphalerite. Prior to the current 2016-17 drill program, past drilling on this vein was focused along an approximate strike length of 250 metres and to a relatively shallow depth of approximately 250 metres and returned consistent high-grade silver-lead-zinc intercepts from the main La Esperanza vein and an associated Hanging Wall vein at the upper levels. The average true width of intercepts from 8 drill holes on the main La Esperanza vein was 4.21 metres returning 330 g/t silver, 0.93% zinc and 1.57% lead. The average true width of drill intercepts from 5 drill holes which intersected the Hanging Wall vein was 1.53 metres returning 324 g/t silver, 1.37% zinc and 1.80% lead (details listed under the La Esperanza project profile on the Company’s website www.canasil.com, and previously reported in the news release dated November 6, 2006). 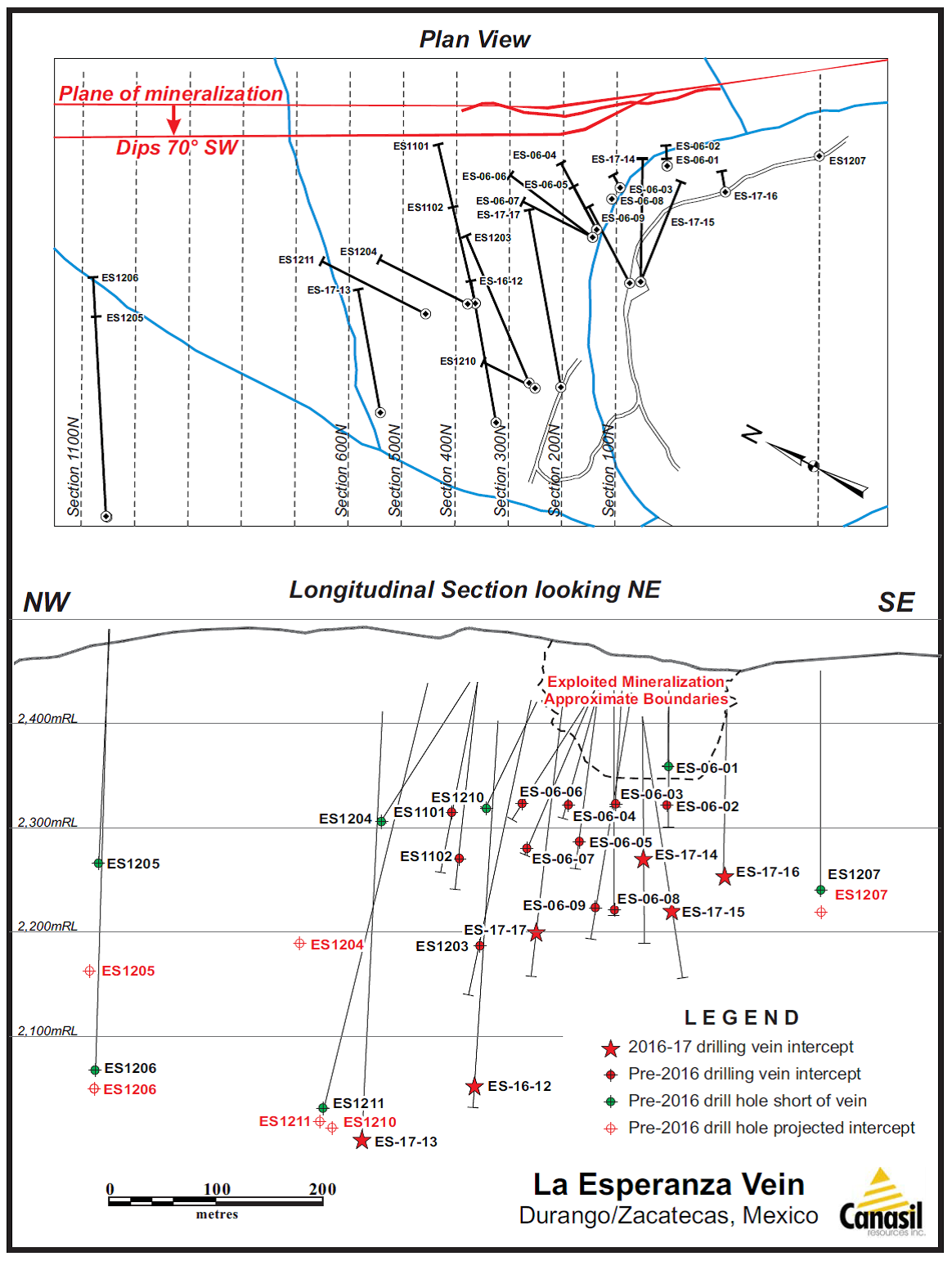