The Vega project is located between the Osilinka and Mesilinka river systems in the Omineca Mining Division of British Columbia, 300 km NW of Prince George. Access to the property, which lies at an elevation of 1,100 – 1,600 metres, is via the Omineca Mines Access Road and logging roads. The Vega project is located between the Mt. Milligan Mine (145 km SE) and the Kemess Project (145 km NW) and is approximately 70 km NNW of the Kwanika deposit and 40 km from the Lorraine deposit.

The Vega property lies on a NNW trending fault structure in Takla Group Volcanic rocks of Upper Triassic to Jurassic age. This volcanic sequence has been intruded by syenite, monzonite and diorite dykes and sills related to the Hogem Batholith to the southwest. Intrusive volcano-sedimentary contacts typically parallel the regional northwest structural trend. Mineralization on the property occurs in brecciated and altered andesite/basalt, altered syenite and altered brecciated syenite. Concentration of sulphides, consisting of pyrite, chalcopyrite, magnetite and minor bornite, occur along shear and fracture zones. Two areas of interest have been identified within the project area: the Vega East and Vega West corridors.

Early prospecting by Cominco in the 1930’s exposed copper and gold mineralization on the south bank of Vega Creek, in the Vega East area. Cominco completed approximately 200 metres of underground workings to investigate the mineralization, identifying a 10.5 metre zone with average 1.46% Cu and 4.82 g/t Au. The area was explored subsequently by various companies including drilling, particularly by BP Minerals from 1974 – 76, however most of the data is not available from these programs except limited information on the BP drilling. In the 1980’s, Canmine Development Corp., a predecessor of Canasil, acquired the claims and in 1988 Cyprus Gold (Canada) completed 1,088 metres of diamond drilling in 8 holes, under an option agreement. Highlights include:  2.03 g/t Au over 1.45 metres (V-88-01), and 0.51 g/t over 5.96 metres (V-88-08).

In the Vega West area, reconnaissance work in 2011 and 2016 on the expanded Vega project claims identified the Pluto showing, where sulphide rich gossans are observed on the hanging wall of a steeply-dipping shear zone on the contact between deformed syenite porphyry and andesite tuffs. The volcanic pile is intruded by an un-altered k-feldspar porphyry. Results from rock samples showed up to 4,714 ppm Cu and >10,000 ppm As.

A detailed helicopter-borne magnetics survey was completed over most of the project area in 2016. Two principal NW-SE structural corridors were identified over the Vega East and Vega West areas (see maps below). The north-striking feldspar porphyry shear zone in the Vega West area is identified as a distinct magnetic feature and can be traced for 2,000 metres south of the Pluto prospect to a second known copper-gold prospect. The magnetic feature in this area is a minimum of 4 km long and is covered by glacial till over most of its length. 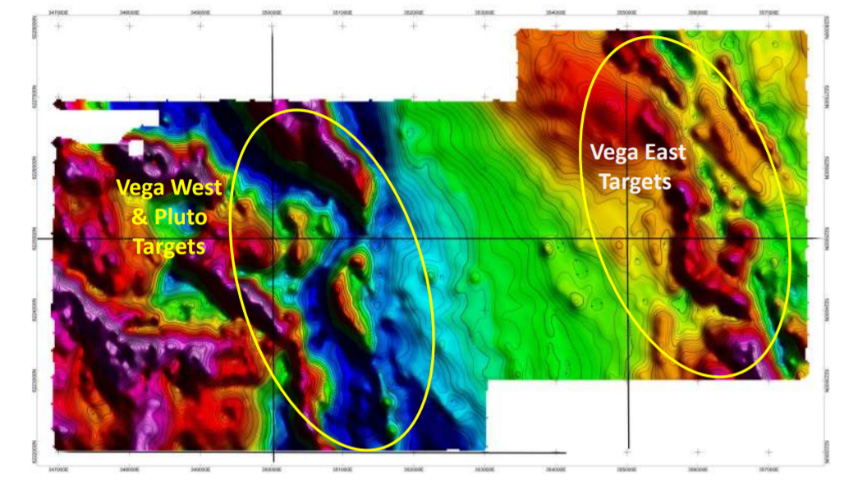 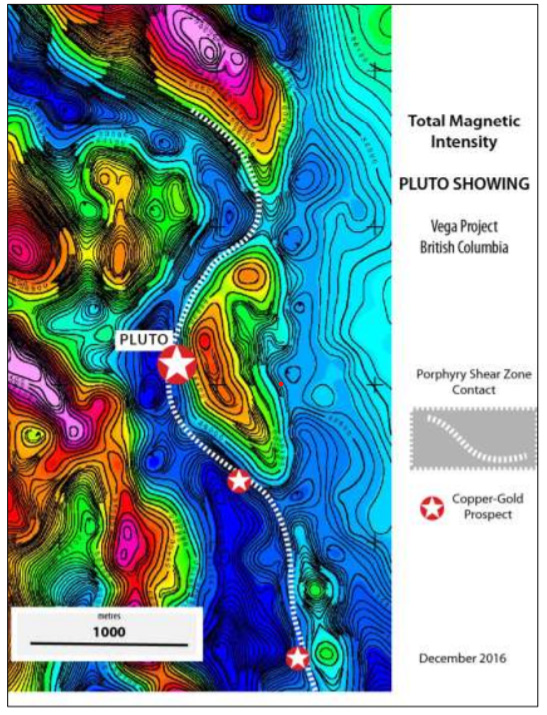 In 2019, Canasil completed a soil geochemical and rock sampling program over a 6.5 by 7.5 km area within the western half of the property. The results from over 300 soil samples identified anomalous and often high-contrast copper, gold and molybdenum assays in three areas (see maps below): 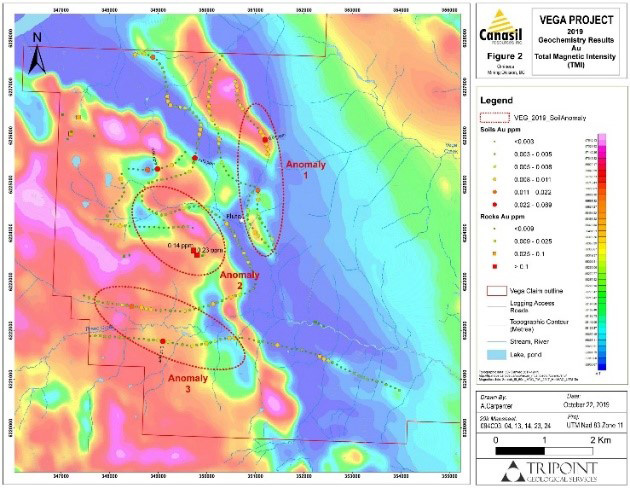