The Carina project is located 45 km NE of the City of Durango, 6.5 km SE of the La Preciosa project (Coeur Mining, Inc.) and 46 km SE of the El Castillo Complex (Argonaut Gold Inc.). It is centrally located within the “Silver Belt” of the Mexican High Plateau region on a trend running from the NW to the SE through Durango State.

A series of low sulphidation veins, breccias and stockwork are observed in the project area, hosted by rhyolites, andesites and sediments. The main vein system is composed of a series of NW-SE striking parallel quartz and fluorite veins with widths of 1.5 m to 2.5 m. A broad area of quartz stockwork with some development of breccias has been visually defined over a zone of 100 m by 300 m. Bladed textures in the quartz are indicative of the higher levels of an epithermal system. 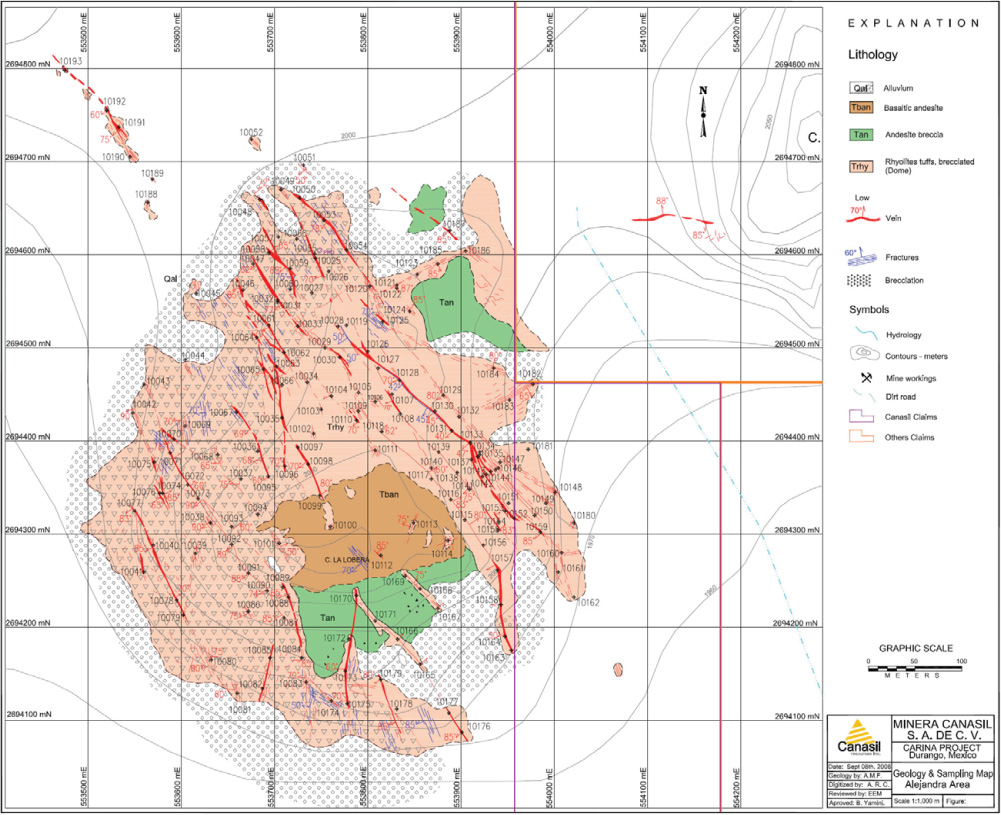 Pan American Silver Corp. completed a diamond drill program in 2012 under an option agreement. The drill program consisted of six drill holes totalling 1,008 m, which tested, at a relatively shallow depth of approximately 75 m to 200 m, an area with multiple quartz vein structures with anomalous silver, gold and base metal values in surface samples. All drill holes intersected narrow quartz veins varying in widths from 0.55 m to 5.90 m and carrying anomalous gold and silver values between 0.1 g/t to 0.435 g/t gold and 1.0 g/t to 6.0 g/t silver. As the surface mineralization observed at the Carina project appears to correspond to the higher levels of an epithermal system, further drilling will be required to test the system at depth.

Prior to the 2012 drilling, Canasil completed a surface sampling and mapping program over an area of 500 m by 800 m covering the veins and stockwork zone with a total of 170 samples. The surface sampling program has shown consistently anomalous gold and silver values.