The current drill program at the Nora project is the first pass at systematic, property-wide exploration. All four initial drill holes have intersected the Candy vein at depth and returned high gold and silver grades, with a notably thicker and higher grade intercept in NRC-20-04. The Candy vein is open to expansion along strike to the north and south, and to depth, and these results confirm the potential for further exploration.

Canasil President and CEO, Bahman Yamini, commented: “The strong high grade intercept from NRC-20-04 is very encouraging at this early stage of drill testing at the Nora project. This relatively wide intercept with high gold and silver grades confirms the potential of the project, and also for continued drilling of the Candy vein. We have now completed the six planned drill holes on the Candy vein and moved to drilling at the Nora vein as planned. The positive progress under current conditions is excellent, and we would like to thank our team, the drill contractors and local communities for their collective efforts to make this program a success.”

The drill program is being implemented by the Company’s exploration team in Mexico under the direction of Eng. Erme Enriquez (CPG). All core samples are logged at the Company’s core storage facility in Durango, Mexico. Samples are prepared and sent to the ALS Laboratories in Zacatecas, Mexico, for preparation and then on to ALS Global in Vancouver for gold and silver analyses by fire assay with an atomic absorption finish (“FA-AA”) on a 30 gram split, and for silver, copper, lead, zinc and trace elements by ICP analysis following digestion of 0.50 gram sample in aqua regia. Overlimit silver and copper are assayed using an aqua regia digestion, followed by ICP-AES or AAS finish.

The Nora project is located approximately 200 km north-west of the City of Durango, with good access and infrastructure. The geological setting is a Tertiary-aged volcanic flow-dome complex. Gold-silver mineralization is hosted within two structurally-controlled epithermal veins, Candy and Nora. Mineralization is typical of that found at many mines in the region, with gold and silver associated with galena, sulfosalt minerals and lesser pyrite, sphalerite and chalcopyrite. There is evidence of some historical mining activity on the Candy vein, which is exposed in discontinuous outcrops for over 900 metres. The fault structure hosting the Candy vein has been traced for a distance of over three kilometres. Samples of vein outcrop and mineral dumps from the Candy vein returned significant gold, silver, copper, zinc and lead values. The second vein, Nora, is found 600 metres northeast of the Candy vein and can be traced for 230 metres with widths of over 9.0 metres. Surface samples from this vein returned anomalous silver values associated with trace sulphides, with a geochemical signature typical of the higher levels of epithermal vein systems in the region.

Historical systematic grid soil sampling over an area of three kilometres by two kilometres covering the Candy and Nora veins and projected extensions, showed elevated silver, base metal (copper, lead and zinc) and pathfinder (antimony and arsenic) values. The combination of the vein outcrops with large areas of anomalous silver and base metal values in soil samples may indicate additional concealed mineral systems. Other major deposits in the region include SSR Mining’s La Pitarrilla deposit located 50 km east of the Nora project. 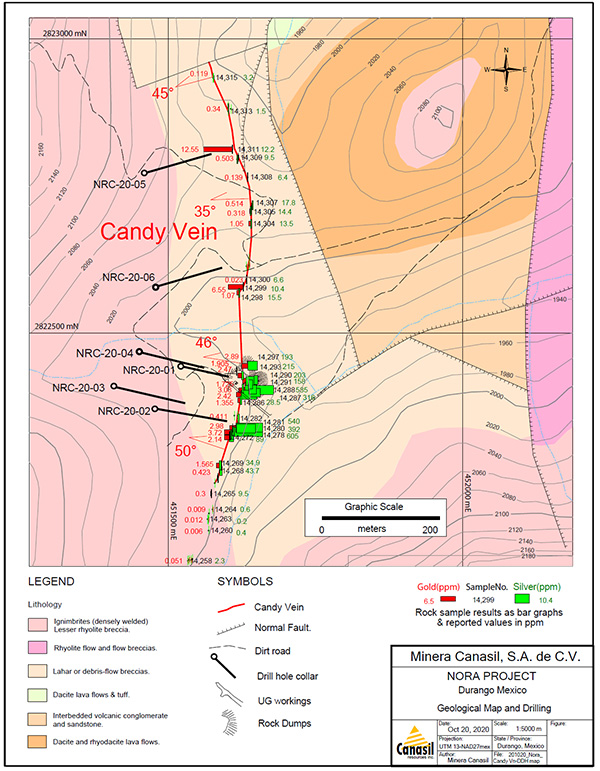