Vancouver, December 12, 2016 - Canasil Resources Inc. (TSX-V: CLZ, DB Frankfurt: 3CC, “Canasil”) is pleased to announce that field prospecting and an airborne magnetics survey has re-focused exploration at the Company’s 100% owned 8,900 hectare Vega Property located in north-central British Columbia, Canada. The Company is still reviewing these late-season programs, however preliminary results are positive. The combination of occurrences of mineralization at surface that are coincident with distinct airborne magnetics signatures, as detailed below, suggest the potential for defining multiple gold-copper targets. The Company is planning a more comprehensive exploration program for the 2017 field season to define drill targets.

There are two primary outcropping targets on the property – the original Vega showing in the east and the Pluto prospect, six kilometres to the west. The Vega showing has been the site of several historical exploration programs, including widely-spaced drilling in the 1960’s and 1980’s, trenching, and a short exploration adit driven in the 1930’s, returning multiple samples carrying gold and copper mineralization. The airborne magnetics signature over the Vega showing is coincident with the area of past exploration activity and is being analyzed to define potential targets for further exploration.

Canasil’s mid-September prospecting program focused on the Pluto prospect and the west-central portion of the property where brightly-coloured gossans (after sulphide minerals) are found in outcrop adjacent to a south-flowing creek. The prospective gossans are located in the hanging wall of a steeply-dipping shear zone on the contact between deformed syenite porphyry and andesite tuff with a fresher, magnetic coarse-grained, feldspar porphyry. Pyrite and arsenopyrite-bearing quartz-carbonate veinlets mark the contact along with dark chlorite. Zones of strong chlorite and sericite alteration are present throughout a 12-metre wide exposure of the hanging wall, along with stringers and veinlets of quartz-pyrite-chalcopyrite. The creek exposures disappear under overburden and the true dimensions and nature of the alteration zone is not known. Two samples collected near the southern edge of the exposed zone (P555101 and P555113) returned encouraging results:

Nine other chip samples collected in the creek exposures of the hanging wall returned lower but distinctly anomalous concentrations of copper, gold, silver and arsenic.

A sample collected across the steeply-dipping contact shear zone was also encouraging:

Pluto has been historically difficult to model and explore because of limited bedrock exposure, however given its location within a known belt of porphyry copper-gold deposits and its spatial association with Takla Group volcanic rocks and Hogem Batholith-type syenite porphyry it appears that the showing may represent the “distal” expression of a mineralized porphyry system.

In order to develop a better understanding of bedrock trends and structures, the Company completed a detailed 315 line-kilometre helicopter-borne magnetics survey in early November 2016 over a fifty square kilometer area that covers most of the property. The results of the airborne survey identified a number of distinct features over the west-central area of the project, including the feldspar porphyry-shear zone contact, several suspect intrusive bodies and other corridors of faulting and possible favourable geology. The north-striking feldspar porphyry-shear zone contact is identified as a distinct magnetic feature and has been traced for 2,000 metres south of the Pluto showing to a second known copper-gold prospect that was not sampled during this field program. The magnetic feature is a minimum of four kilometres long and is covered by glacial till over most of its length.

Prospecting in the northwestern part of the property in 2013 and 2016 identified three areas of highly anomalous copper mineralization in sub-outcrop and outcrop. Two of the areas coincide with known porphyry copper Minfile showings (Bottle - 094C 110 and Ten - 094C 134) and produced values as high as 1.49% copper with elevated silver, zinc and molybdenum values. The third area of highly anomalous copper mineralization, called the BB Zone, does not coincide with any known recorded locality and therefore constitutes a new showing. Samples collected from the BB showing area grade up to 1.775% Cu, 17.5 ppm Ag and 0.131 ppm Au.

Canasil and its consultants utilize an industry-standard sample protocol of blind sample standards and blanks. Rock sample reported here were analyzed by ALS Minerals Ltd in North Vancouver by means of a four-acid digestion, trace element analyses by ICP-ME 61 and trace gold by fire assay and atomic absorption on a 30-gram nominal sample weight.

About the Vega gold-copper project:

The 100% owned Vega claims cover 8,900 hectares located between the Osilinka and Mesilinka river systems in the Omineca Mining Division of British Columbia, 300 km northwest of Prince George. The property islocated on a well-recognized trend for hosting major gold-copper porphyry deposits.Access to the property, which lies at an elevation of 1,100 – 1,600 metres, is via the Omineca Mines Access Road and logging roads. The property lies on a north-northwest trending fault structure in Takla Group Volcanic rocks of Upper Triassic to Jurassic age. This volcanic sequence has been intruded by syenite, monzonite and diorite dykes and sills related to the Hogem Batholith. Intrusive volcano-sedimentary contacts typically parallel the regional northwest structural trend. The Property was acquired by staking to cover the Vega showing then expanded to include Pluto and areas with favourable geology. Mineralization at the Vega showing occurs in brecciated and altered andesite/basalt, altered syenite and altered brecciated syenite where close spaced fracturing and faulting is observed over a broad deformation zone, that is up to 490 metres wide and 2,100 metres in length. In this area a concentration of sulphides, consisting of pyrite, chalcopyrite, magnetite and minor bornite, occur along shear and fracture zones. 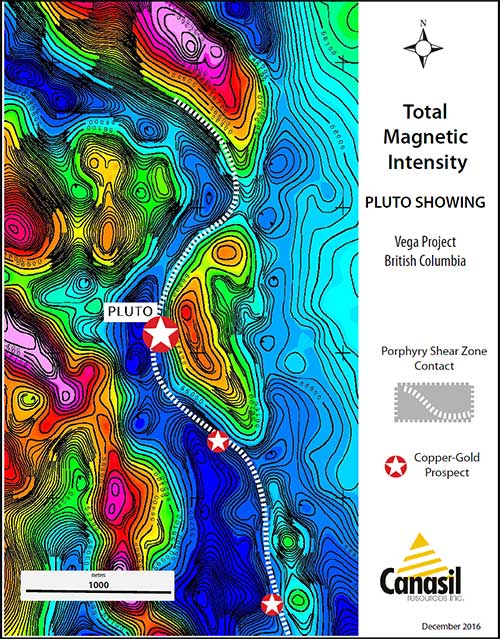