This vein intercept is at a vertical depth of approximately 225 metres below surface, located 50 metres below and 25 metres step-out to the SE from drill hole ES-17-16. This wide vein intercept is the southeast extension of the La Esperanza vein and is located in an untested area that is below previous drilling. The entire vein structure appears to be preserved over the 14.11-metre intercept in this zone and this opens the southeast extension of the La Esperanza vein for additional drilling along strike and to depth, which is very encouraging.

The recovery of a complete, non-faulted interval of the La Esperanza vein reveals a number of important geological features that have important implications for exploration. The vein textures and symmetry of the vein suggests a well-developed epithermal environment, with the strongest mineralization within a breccia domain near the footwall contact. Re-logging of earlier vein intersections suggest similar controls on mineralization. The same mineralizing relationships are noted at other epithermal vein deposits and are interpreted to be the result of intense boiling. Drilling has traced the La Esperanza vein over a strike distance of 425 metres and to a depth of 350 metres and remains open for expansion both to the northwest and southeast along strike and to depth. A plan map and long section showing the trace and pierce point of ES-18-21 and photos of the core from the vein intercept are attached below.

The La Esperanza silver-gold-zinc-lead project covers 14,916 hectares, located 100 km SSE of the city of Durango in southern Durango and northern Zacatecas States. The project is easily accessible from Canasil’s operating base in Durango with excellent infrastructure. The project is located on the well-recognized world class Fresnillo silver belt, hosting a number of prominent silver mines such as the San Martin-Sabinas mines of Grupo Mexico and Peñoles, the La Colorada mine of Pan American Silver and La Parrilla and Del Toro mines of First Majestic Silver and Fresnillo PLC’s Fresnillo mine.

A series of silver-zinc-lead epithermal veins are observed over a northwest-southeast striking zone extending over approximately 15 kilometres hosted in the Lower Volcanic Group. Mineralization occurs in low to intermediate sulphidation veins, primarily striking northwest and dipping southwest. The main La Esperanza vein, located in the southeast of the project area, is a banded and cockade white to grey quartz breccia epithermal vein with silver, gold, zinc and lead mineralization associated with argentiferous galena, silver sulfosalt minerals and sphalerite. Drilling to date on this vein has outlined a mineralized envelope over a strike distance of 425 metres and to a depth of 350 metres that is open in both directions to the northwest and southeast along strike and to depth defined by mineralized intercepts over appreciable widths and high silver-gold-zinc-lead grades. Alteration of the volcanic host rocks extending along strike from the La Esperanza vein outcrop, the spatial association with a discrete broad magnetic anomaly (possibly an igneous intrusion at depth), as well as local drainage patterns has outlined a target extending for over 5 kilometres in this area. Further details are listed under the La Esperanza project profile on the Company’s website www.canasil.com, and have been previously reported in the company’s news releases. 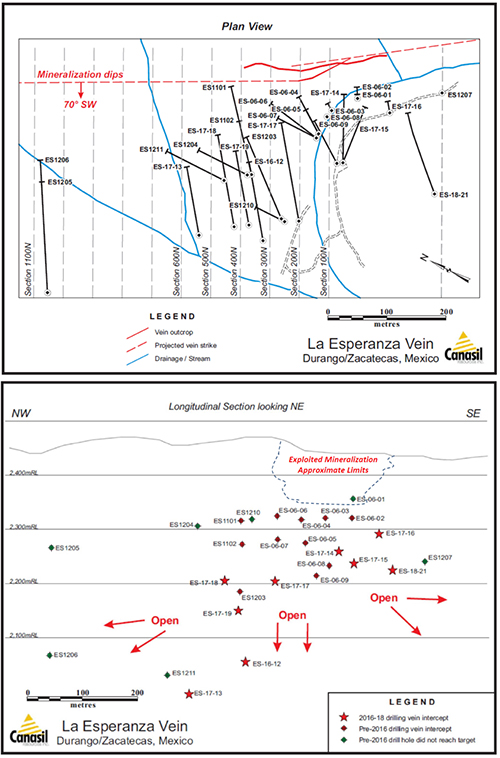 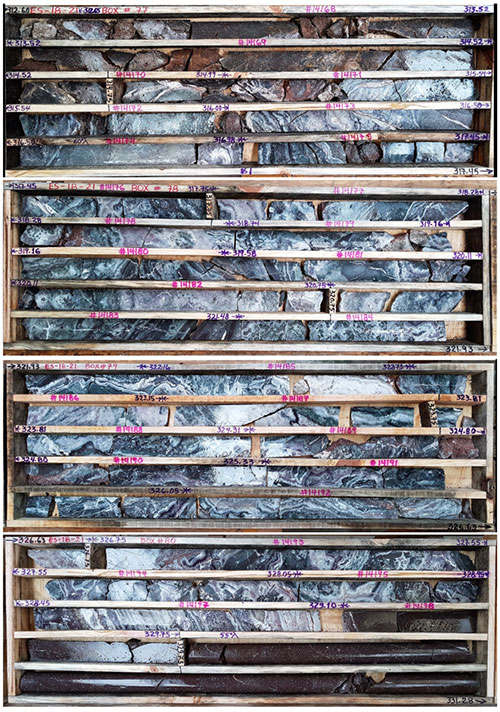