Vancouver, February 18, 2016 - Canasil Resources Inc. (TSX-V: CLZ, DB Frankfurt: 3CC, “Canasil” or the “Company”) is pleased to announce that Orex Minerals Inc. (TSX-V: REX, “Orex”) has completed the Phase-1 core drilling program of 17 drill holes for a total of 2,000 metres at the Sandra-Escobar Project in Durango State, Mexico. The program has tested the target zone along a strike length of approximately 550 metres with drill holes located on 6 sections approximately 100 metres apart. A map showing the location of the drill holes is attached for reference. Assay results from the program will be announced progressively as they are received and processed. Orex plans to extend the drill program with a further 3,000 metres of core drilling starting early March 2016. The project is being advanced by Orex under an option agreement with Canasil announced on September 15, 2015.

The Sandra-Escobar project is located 200 km northwest of the City of Durango, Mexico, in the heart of the “Mexican Silver Trend”, with excellent access and infrastructure. This prolific trend hosts some of the world’s largest silver camps and deposits with many past and present producing mines and significant silver-gold deposits. The project area covers over 6,976 hectares of mineral concessions with multiple mineralized epithermal veins and breccia structures. These veins form a high level silver-gold-base metals system, hosted in andesitic and rhyolitic rocks, centered on a large rhyolite dome complex in the north and silver systems in smaller rhyolite dome complexes to the southeast. Intense alteration zones and fluid flooding in permeable formations may also indicate the presence of bulk tonnage targets. Under the terms of the agreement dated September 15, 2015, Orex has an option to earn up to 65% interest in the project through total cash and share payments of $1,000,000 and exploration expenditures of US$4,000,000 over five years. 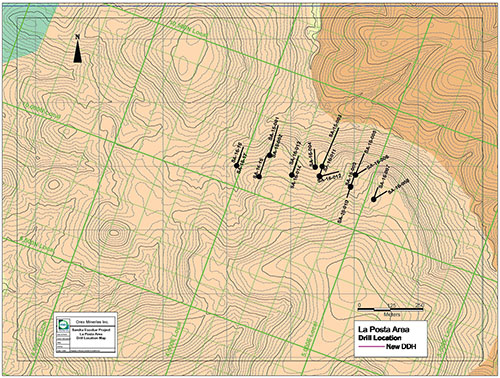 Neither TSX venture Exchange nor its Regulation Services provider (as that term is defined in the policies of the TSX Venture Exchange) accepts responsibility for the adequacy or accuracy of this news release.