Vancouver, October 24, 2019 - Canasil Resources Inc. (TSX-V: CLZ, DB Frankfurt: 3CC, “Canasil” or “the Company”) is pleased to announce that the Company has received analytical results from the 2019 soil geochemical and rock sampling work done at its 100%-owned Vega copper-gold property located in north-central British Columbia, Canada. The field work encompassed a detailed “base-of-slope” sampling programme on 100m spacings within a core area that is approximately 6.5 by 7.5 kilometres in size. The area selected is within the western half of the Vega Property and was intended to complete “first-pass” coverage of a prospective tract characterized by several copper, gold and silver showings and intense rock alteration that maybe related to magnetic anomalies and porphyritic intrusive rocks. In recent years Canasil has undertaken a sequence of surveys at Vega that include a detailed airborne magnetic survey, airborne LiDAR and satellite-based alteration studies.

The results from over 300 soil samples collected along 30 line-kilometres of contour soil survey lines are particularly encouraging and identify anomalous and often high-contrast copper, gold and molybdenum assays that may be associated with strong magnetic anomalies. Three large cluster anomalies are evident, outlined in the figures below:

The 2019 field work has already added significantly to the understanding of the mineral potential within the Vega project area. Areas of silicification, sericite-pyrite and feldspar-hematite alteration were encountered that are very encouraging signs of a hydrothermal environment for hosting porphyry style copper-gold mineralization.  The extensive soil sampling in areas identified by airborne magnetics signatures have identified excellent targets for further exploration and ultimately drill testing.

Exploration interest in the region of the Vega Project has increased significantly in 2019. Several property option agreements have been signed by other companies, staking has increased, and numerous exploration initiatives are underway in the area.

Bahman Yamini, President of Canasil, commented: “The 2019 field work results at Vega are very positive and have identified multiple high priority targets for future follow up, confirming areas of interest outlined by the prior airborne magnetic and LiDAR surveys. We are also particularly impressed by the quality of work performed by our field geological consultants, Tripoint Geological Services.” 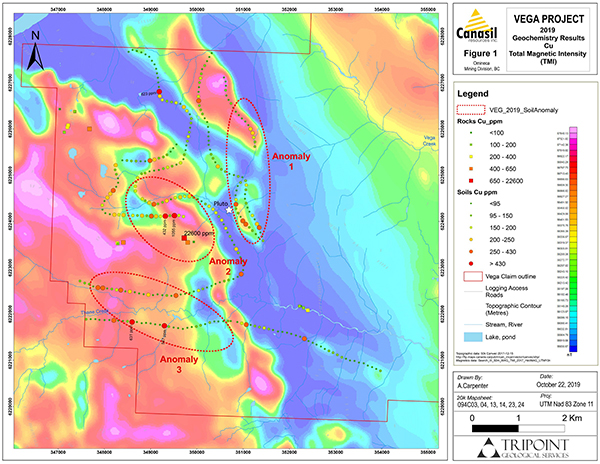 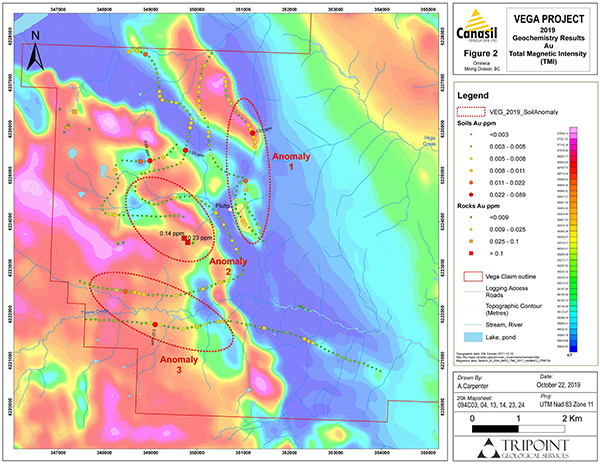 About the Vega copper-gold project:

The 100%-owned Vega claims cover 9,125 hectares located between the Osilinka and Mesilinka river systems in the Omineca Mining Division of British Columbia, 300 km northwest of Prince George. The property is in a well-recognized copper-gold porphyry district. Access to the property, which lies at an elevation of 1,100 – 1,600 metres, is via the Omineca Mines Access Road and local logging roads. The property lies on a north-northwest trending fault structure in Takla Group Volcanic rocks of Upper Triassic to Jurassic age. This volcanic sequence has been intruded by syenite, monzonite and diorite stocks, dykes and sills possibly related to the Hogem Batholith. Intrusive volcano-sedimentary contacts typically parallel the regional northwest structural trend. The Vega project is located between the Mt. Milligan Mine (145 km southeast) and the Kemess Project (145 km northwest) and is approximately 70 km north north-west of the Kwanika deposit (65% Serengeti Resources Inc., 35% Posco International Corp.), 65 km from Sun Metals Corp. Stardust project, and 40 km from the Lorraine deposit (51% Teck Resources Ltd, 49% Sun Metals Corp.).

Geological mapping and sampling field work was carried out by Tripoint Geological Services Ltd. under the direction of Wade Barnes, P. Geo., President. Soil and Rock samples were delivered directly to ALS Canada Ltd. laboratories in North Vancouver, BC. Soil samples were assayed by aqua regia digestion with ICP finish (Au-TL43 and b ME-MS41) and rock samples were assayed by four acid digestion with 33 elements with ICP-AES finish (ME-ICP61) and gold with a 30g FA-AA finish (Au-AA23).