MAG’s Phase 3 exploration program consisted of six follow-up holes (SA15-30 - 35) designed to seek mineralization in more favorable host rocks (limestones) at depth beneath the strongest silver-copper-antimony mineralization with associated skarn alteration seen at surface and in earlier drilling. No limestones were encountered and, as in Phase 1 and 2 drilling, appreciable widths of strongly anomalous zinc mineralization were cut in three of the new holes (SA15-32, 34, and 35 - see Table 1 below). The best dispersed zinc intercept was hole SA15-34 with 28 metres (“m”) grading 1.43% zinc. The best narrow high-grade zinc zone was in Hole SA15-31 with 0.79 m grading 7.79% zinc. Strongly anomalous copper with no appreciable silver was cut in three holes.

MAG concluded that Salamandra continues to manifest signs of an extensive, complex system with a strong metals endowment. The broad pervasive multi-stage mineralization, now including consistent gold, in relatively unfavorable host rocks, supports interest in the system and warrants additional analysis to track it into the favorable limestones that regional work indicates should lie at depth.

Eighteen of 23 holes drilled thus far by MAG during its three phases of exploration have cut appreciable widths of strongly anomalous zinc mineralization and lesser intervals of silver-copper mineralization. The new intersection of appreciable gold and tungsten mineralization is a first at Salamandra and may suggest that the system remains open for expansion through additional drilling. The lack of overlap between the metals zones suggests a combination of large-scale zoning and multi-stage mineralization; both hallmark features of a large Carbonate Replacement Deposit/skarn system. The fact that the gold and tungsten-bearing skarns were encountered outside the area of concentrated drilling and that deep drilling has not been undertaken outside this small area suggests that potential remains open in the majority of the system. Based on regional reconnaissance, MAG believes potentially more favorable limestone host rocks do underlie the system but that the hornfelsed shales that host the mineralization encountered to date in the drilled area are structurally repeated and overthickened. Another round of geophysical surveying and re-evaluation is in order to determine if limestone can be located.

* Interval lengths represent the core length intercepted in the reported interval. True thicknesses cannot be
determined with the data available at this time.

Salamandra appears to be a typical Mexican Carbonate Replacement/Skarn Deposit (“CRD”) and is very similar to MAG's Cinco de Mayo Project; the same exploration model that drove successful exploration there is being applied to Salamandra.  Salamandra lies 80 kilometres northwest of Mexico's largest known silver-lead-zinc CRD-skarn deposit, the Sabinas-San Martin District.  Both Salamandra and Sabinas-San Martin are favorably positioned at the intersection of the Mexican CRD Belt (that also hosts MAG’s Cinco de Mayo CRD project) and the Fresnillo Trend (that hosts MAG’s Juanicipio Project).  Previous drilling at Salamandra by Canasil (Holes SA-1 to 12) was undertaken in a limited area characterized by medium to high-grade zinc mineralization with significant silver values.  MAG’s exploration program was designed to probe and develop a better understanding of the scope and size of the system and development of exploration vectors, so drilling focused on targets 200 to 2,000 metres from previous drilling. Targets included mineralized intrusive breccias, dike swarms and mineralized structures revealed by MAG’s detailed geologic mapping, geochemical sampling, and reinterpretation of Canasil geophysics.

In May 2013, MAG entered into an option agreement with Canasil whereby MAG can earn up to a 70% interest in Canasil's 14,719 hectare Salamandra property (News Release dated May 28, 2013).  For the initial earn-in of a 55% interest, MAG must complete C$5.5 million in exploration expenditures on the property and make total cash payments to Canasil of C$750,000 during the first option term to May 27, 2017.  MAG has now fulfilled the exploration commitments (C$5.5 million) required for the initial 55% earn-in option on the property. A final payment of C$250,000 is due on or before May 23, 2016, prior to exercising the 55% earn-in option.

Quality Assurance and Control: MAG has in place a quality control program to ensure best practices in sampling and analysis. Samples were collected by employees of consulting firm Minera Cascabel S.A. de C.V. on behalf of MAG Silver Corp. The diamond drill core samples are shipped directly in security sealed bags to ALS-Chemex Laboratories preparation facilities in Hermosillo, Sonora or Chihuahua City (Certification ISO 9001). Sample pulps are shipped from there to ALS-Chemex Laboratories in North Vancouver, Canada for analysis. All samples were assayed for gold by standard fire assay-ICP finish with a 50 gram charge. Gold values in excess of 3.00 g/t were re-analyzed by fire assay with gravimetric finish for greater accuracy. Silver, zinc, copper and lead values in excess of 100 ppm, 1%, 1% and 1% respectively are also repeated by fire assay.

Canasil is a Canadian mineral exploration company with a strong portfolio of 100% owned silver-gold-copper-lead-zinc projects in Durango, Sinaloa and Zacatecas States, Mexico, and in British Columbia, Canada. The Company’s directors and management include industry professionals with a track record of identifying and advancing successful mineral exploration projects through to discovery and further development. The Company is actively engaged in the exploration of its mineral properties, and maintains an operating subsidiary in Durango, Mexico, with full time geological and support staff for its operations in Mexico. 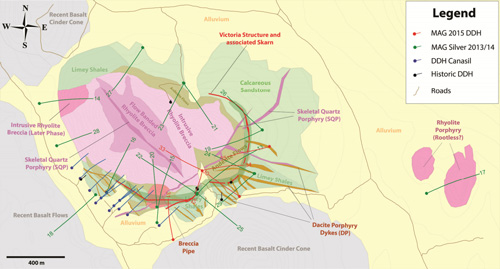